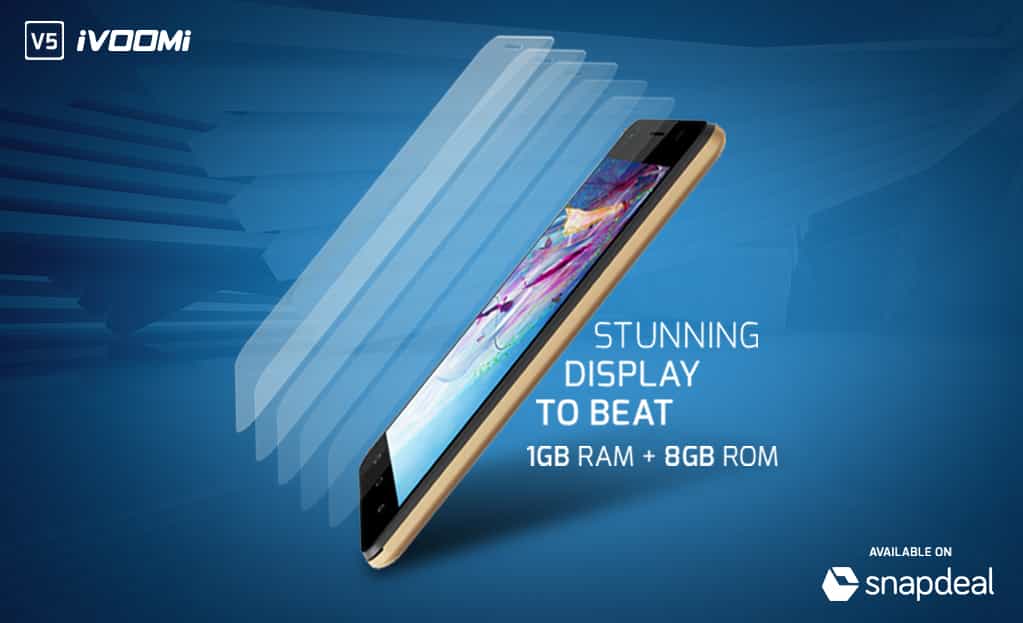 iVOOMi, India’s pocket-friendly smartphone today launched V5 on Snapdeal. The entry-level smartphone comes with a shatterproof display and 4G VoLTE and is designed for high performance and efficiency. The feature-rich smartphone is priced at Rs. 3,499.

The smartphone is packed with 1GB RAM + 8GB ROM. The storage can be expanded up to 128GB via a micro SD card on the device. The V5 is equipped with a 2800mAh battery and runs on Android 7.0 Nougat. The dual SIM smartphone features a 5-inch display for those who enjoy movies and games on a bigger screen and simultaneously look for a handy device. As for its optics, iVOOMi V5 sports a 5MP Rear Camera with LED flash and a 5MP Selfie Camera. At the heart, the device runs on Quad Core 1.2GHz Processor and is available in two colour variants namely Jade Black and Champagne Gold.

Reliance Jio users are entitled to receive a cashback worth Rs. 2,200 by recharging their Jio connections with a Rs. 198 or Rs. 299 prepaid pack on or before June 30. After the first successful recharge, the customers will receive 44 vouchers of Rs. 50 each that will be credited to the MyJio app and can be redeemed one at a time against subsequent recharges.

iVOOMi had earlier launched its flagship products Me3 and Me3S. With the launch of V5, iVOOMi brings shatterproof technology to entry-level smartphones.

Published in Gadgets and News & Updates

Snapdeal is India's leading value e-commerce platform that has helped Indian e-commerce grow beyond just brands and urban users. Nearly 80% of Snapdeal's users come from non-metro locations highlighting its deep reach across the length and breadth of the country. Snapdeal hosts a wide selection of good quality, value-priced merchandise across fashion, home, beauty & personal care, general merchandise, and other categories. With more than 200 Mn app installations, it is one of India's top online shopping destinations. According to a recent industry report by global consulting firm Kearney, the growing number of value-conscious online shoppers is reshaping India's e-commerce landscape. Value-conscious online buyers focus on finding affordable products that meet their needs of desirable quality, durability, and trendiness. The typical shopping behaviours and demands of these consumers have led to the rise of value e-commerce - differentiated business models optimized to serve the needs of value-conscious online customers. Currently estimated at $4Bn, value e-commerce in India is expected to see fast growth at 26% CAGR and reach $40 Bn by 2030.