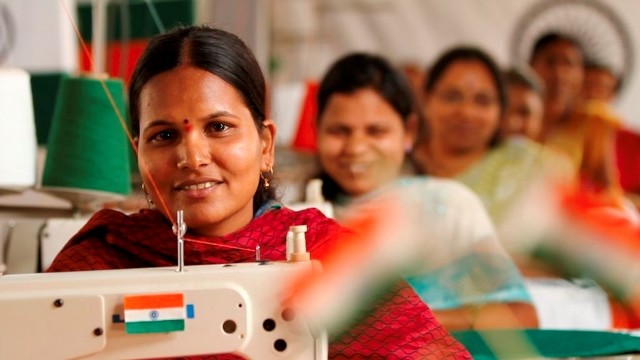 Global e-commerce behemoths jostling for space in India is testament to the crucial importance that India holds as one of the biggest consumer markets in the world. India is the world’s fastest growing major economy, home to a nearly 400-500 million strong middle class, has more than 350 million smartphone users juiced up with aggressively priced data plans. Just the number of current smartphone users in India is more than the entire population on US. The US retailers who are here and the Chinese ones in waiting are all eyeing this same pot of gold.

A similar rush was witnessed in the 17th, 18th and 19th centuries when various European powers, including the Portuguese, Dutch and the English raced to forge local alliances, secure resources and carve out India amongst themselves. It took us a couple of centuries to gain back our country and gradually reclaim our rightful space amongst the leading powers of the world.

Digital commerce will be one of the defining forces in India, transforming India over the next decade – in very much the same manner as the green revolution, white revolution, IT revolution and the telecom revolution propelled India forward.

Flipkart has done tremendous work to help build an ecosystem in this space. Sachin, Binny and the entire team deserve our unreserved applause for their accomplishments, grit and hard work. They serve as a huge inspiration for others to become entrepreneurs – which can only be good for India.

While the Walmart deal is a significant milestone, we are in the early stages of India’s digital commerce growth journey and lots more will be built and achieved in the country.

There has been much discussion in various forums, private and public, about how India should shape its digital commerce sector. Should we emulate the Chinese in restricting foreign competition lest we become a digital colony like the Europe? Or shall we proceed ahead, believing in perfect competition, market forces and good karma.

While the debate rages, India has in fact found the right solution.

And as we often do, we haven’t implemented it.

India’s policies are very clear that FDI in e-commerce is allowed only in marketplaces and not in B2C retailing. These marketplaces are prohibited from acting as sellers – they are not to own / control any inventory or influence the price of goods sold on the platform. They are required to provide a level playing field to all sellers and not offer discounts or warranties from their side. The policy clearly prohibits FDI in B2C e-commerce, because it recognizes that this will disrupt small Indian businesses.

However, it is commonly understood and widely reported that many such marketplaces are thinly disguised inventory operations, especially in the high demand, high value segments like mobiles, laptops, TVs, home appliances, kitchen appliances, branded fashion etc.

The violations of the existing policy are creating dis-quiet amongst India’s small enterprises. Entry of new players will accelerate the erosion of space for such sellers. Grocery is slated to be the next price war frontier, bruising and decimating millions of small, neighborhood retail operations.

So, what does India need to do?

E-commerce is India’s big opportunity to use India’s vast domestic consumption to boost employment in the country. As more buyers shop online, the sellers need to come online. Marketplaces with their traffic, technology, logistics and payment solutions are the first point of call for sellers exploring the online world.

Genuine marketplaces can provide easy access to small enterprises to sell across the country and help them grow by discovering new markets and products. They can help millions take their first step in starting their online business. They can enable the smaller ones to grow bigger.

The collective employment generation by such enterprises can be huge. In 2016, KPMG did a study and determined that nearly 1.3 Million online sellers can emerge in India by as early as 2020 and that nearly 70% of these will be in smaller cities and that 20% will be women. Each such seller helps create another 3-4 direct jobs. That’s nearly 5 Million new jobs, with 3.5 Million such jobs in smaller cities. And I know these are conservative estimates because at Snapdeal we have worked with lakhs of such sellers in the last few years.

Nearly 50 million Indians shop online and with the Jio-led smartphone data revolution underway, another 100 million will gradually come online in the next 3-4 years, paving the way for more to follow. If India buys online, Indians must also sell online. Invariably, these will be goods made in India and also sourced globally and that is fine – consumers, producers, traders, factories, artisans will benefit from the market growth.

Sellers’ growth and buyer benefits are not an either / or option – in fact they are the two sides of the same coin. We can have it both – we do not need to sell ourselves short in the timid belief that FDI flows will stop if we implement our laws. Marketplaces can help boost competition, reduce costs, improve logistics and offer a better experience. But, they do not need to cross the line and become retailers. When they do this, they become competitors and not enablers of these small businesses. What they then cause is displacement and not growth.

India’s small sellers need a safe online space to grow, without being crowded out by the very platforms they are expected to trust. This is not protectionism and these are not new measures. This is the stated law of the land (Press Note 3 of 2016) and a balanced, thoughtfully laid out one at that.

The government is aware of the matter and should act in the interest of the nation and enable growth that benefits the sector. Having enlightened self-interest at heart is good politics, good economics and sound nation building.

Using e-commerce as a direct lever to grow small businesses is a once in a lifetime opportunity and one that we are passionate about. As the only independent and genuine marketplace in India, Snapdeal will continue to nurture and guide the online journey of India’s small businesses.

So, what would constitute success for Indian e-commerce in the year 2025?

A troika of Indian Baidu, Alibaba and Tencent would make for good optics, however, a flourishing legion of tens of millions of thriving online businesses humming across the country would be real success.

– By Kunal Bahl, CEO of Snapdeal